You are here: Home / Archives for Wine Reviews / Red Wines

Over the last 25 years or so, the island of Sicily has tranformed itself from an overgrown grape juice factory into a hotbed for cutting edge, superripe, fine wines. Its long, arid, sweltering summers allow for extreme ripening of grapes, thus producing ripe, dense, fruit-packed wines. In the last decade some remarkable (and expensive) Sicilian wines have stunned the wine world, but the island is also becoming known as a place for great values.

One of these is this red wine from the Colosi winery — Colosi Rosso — which retails for under 10 bucks. It has a somewhat closed nose at first, but if you give it some time it will eventually produce aromas of sour cherry, sour cranberry, and a touch of plum. In the mouth it has a ripe, fresh, open fruit flavor — cherry again, along with jammy red raspberry, black raspberry, plum, and pomegranate. It displays good depth, with mild hints of earth and tar, and has a smooth texture, with medium tannins.

I originally discovered this wine about four years ago, and though the acid and tannin levels seem to fluctuate according to the vintage (in some years, this wine may remind you of Chianti), the fruit has always been ripe and buying a bottle has never been a disappointment. Try it with chicken fricasee or chicken pot pie, or with meals based on turkey or lean ground turkey. Itï¿½s also enjoyable on its own — consider it with simple frozen-food type appetizers (hot poppers, pigs in blankets, mini-pizza). Because of the juicy jammy fruit, this might be a good bridge wine for transporting Yellow Tailers to real wine.

This wine is imported by Vias Wine

When you are looking for a fresh-flavored, light-to-meidum-bodied, food-friendly red wine with good depth and a uniqueness based on its origins, and don’t want to spend a fortune, one region to consider is Sardninia (or Sardegna) in Italy. Perhaps best known for Cannonau (known elsewhere as Grenache or Garnacha), Sardinia still is a relatively unknown wine area outside of Italy. This is good news and bad news for wine drinkers in the US — bad because Sardinian wines are difficult to find, but good because what you do find is likely to be enjoyable and fairly priced.

The geekiest of wine geeks will be able to tell you that the wine to drink from Sardinia is the aforementioned Cannonau, but I’m telling you today that there is at least one other grape to consider: Carignano. Known as Carignan in France, the grape is often found in the same places where Grenache is grown — and used most notably in Languedoc-Roussillon in blends with Grenache and also Cinsault. In Italy, Carignano is rare — hardly found anywhere other than in Sardinia. However, it is in the Sardinian soil — particularly in the southwestern district known as Sulcis — that the grape reaches perhaps its greatest heights.

A great example of this grape from the Sulcis area is Santadi Grotta Rossa Carignano del Sulcis. If my quick brief on Sardegna didn’t interest you, maybe this will: this wine was created by the man who oversees the Santadi winery — Giacomo Tachis, better known as the winemaker from Sassicaia.

The nose of this wine shows ripe blackberry, black cherry, earth, alcohol. In the mouth, you enjoy a very smooth texture, ripe black raspberry, sweet boysenberry, and black cherry flavors upfront. Some black pepper, a touch of vanilla spice, and earthy, herbal elements appear in the midpalate and stay through the finish. Mild acidity, medium tannins. Finishes with dry black fruit, sweet tobacco, drying tannins — and lasts a lot longer than you might expect from a wine in this price range (about $10-12).

This is a nice, round, warm red with good tannins that will match well with hard cheeses, turkey burgers, poultry, and meatier fish, such as catfish and salmon. The acidity is acceptable but too low to stand up to some foods; keep it away from tomato-based dishes and fatty meats.

The US importer for Santadi Grotta Rossa Carignano del Sulcis is Neil Empson.

Find this wine at a retailer through Wine-Searcher or WineZap. 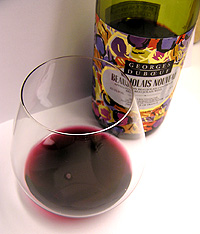 The snobs love to put down Beaujolais Nouveau … as one of my toffee-nosed friends stated recently, “I’ve moved far beyond that gimmicky grape juice”.

Ah, how quickly the leopard changes his spots … that same friend once LOVED Beaujolais Nouveau, even through Easter (!), but now is much too good for it, and would be embarrassed to be seen carrying one of those colorful bottles.

Personally, I don’t love the taste of Beaujolais Nouveau, but have come to appreciate the icon that it has become. Think about it: is there any other universally accepted date in the wine industry than the third Thursday of November? Is there any other wine in the world that brings together so many different people, in events and ceremonies and do-good causes? Yes, Nouveau is an over-hyped public relations event for an under-performing wine — but the only folks complaining are either 1) jealous insiders who can’t think of anything to top it; and 2) pretentious wine geeks who can’t appear powerful and intelligent speaking about such a simple wine.

Nouveau is a hard wine to swallow for some — especially when they can’t pontificate about the mineral content of the vineyard soil, or the debate between Vosges vs. Allier barrels, or malolactic fermentation treatment, or some other information that 99% of the population can care less about. Yes, such a problem — a wine not for thinking, just for drinking.

In the meantime everyone else is having a grand old time uncorking the bottles, pouring it into styrofoam cups (egads!), spilling it on each other, and laughing and enjoying life to the fullest. It is, after all, the “wine without rules“.

For those of you who are interested, I managed to grab a glass of Nouveau just after the stroke of midnight, and scribbled the following notes.

Nose is open, and clean, expressing bright, fresh strawberry and red cherry, with a touch of ripe banana and a ripe pastry / confection-like aroma (powdered sugar? does that even have a smell?).

In the mouth it is easy, very light, bright, fruity. Tastes a lot like Smuckers raspberry jam, or a cherry-flavored Jolly Rancher, though not quite that sweet (the finish is completely dry). At the very end of what is a longer than expected finish, you get a touch of earth, overripe fruit, and a layer of ripe tannin. The acidity starts to pucker up at the end of the finish; until then, it is mostly obscured by the juicy fruit flavors.

Is this a wine to contemplate ï¿½ no ï¿½ and, yes. Itï¿½s too simple to pore over, but simple enough to pour over. At the same time, itï¿½s worth analyzing for a few minutes, if only as conjecture for the 2006 Beaujolais vintage. If we are to taste it as a preview to the “real” Beaujolais wines, then this Nouveau tells us that 2006 Beaujolais wines might have more tannin than in a typical year, and be slightly fatter and rounder than weï¿½re used to. The ripe, bright fruit certainly suggests that 2006 will be a fine year, perhaps excellent year, for Cru Beaujolais. If the extra tannins do in fact come out in the spring 2007 releases, then 2006 may cellar longer than most vintages (not an outlandish thought ï¿½ there are some Cru from the miraculous 2003 vintage that still need time).

After contemplating the possibilities of 2006 Cru Beaujolais, as perceived from this Nouveau, you can then proceed to do with the wine what you may. That includes drinking in paper cups, with ice cubes, mixed with soda, doused on strawberries, poured over your head, and, of course, served to company who “doesnï¿½t like red wine”.

Furthermore, it is a good choice for Thanksgiving (what perfect timing!) — for a few reasons. First, it will match quite nicely with just about everything from the varied appetizers to the chestnut gravy to the cranberry sauce. Second, you can serve it to everyone — beer drinkers, white zinners, fruit-wine lovers, white wine-onlyï¿½s, and semi-serious wine drinkers. Third, itï¿½s a great way to get a wine snob wincing and whining (fun! fun!) ï¿½ and whatï¿½s getting together with family and friends without a little argument?

How often can you find a Barbera from Piedmont under ten bucks? And would you believe it would be any good?

The wine comes from a high-altitude (about 1200 ft.) vineyard in the Monferrato hills of Piedmont, is fermented in stainless steel, sees no oak, but does get a malolactic treatment, for those who want to sound smart when chatting about it. The lack of oak allows the pure, clean Barbera fruit to come out in the wine — which for me is a positive.

That pure fruit is immediately noticed in Castelvero Barbera’s perfumey, open nose, which bursts with red cherries, black raspberry, hints of spice and earth. The palate has ripe black and red cherry fruit, raspberry, touches of cranberry and spice, all delivered on a smooth texture. Gushing, mouthwatering acidity and soft tannins add to the structure and help with food compatibility. It’s well balanced through the finish, which is longer than expected and includes both red and black berry fruits. Match it with pasta in marinara and other red-sauce dishes, grilled or blackened poultry, meaty fish (salmon, trout, blackened catfish), mild cheeses, mac and cheese. This is a really nice red wine for the price: soft and easy drinking, yet complex enough to be enjoyable and matchable with a variety of foods. Great Value and an Everyday Wine. 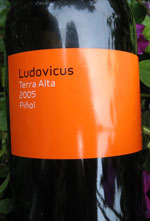 This wine could have been the result of Southern rap (Ludacris) meeting punk rock (Sid Vicious) … but, in reality this wine has nothing to do with either.

Looking again at the label, you might think “oh great, another Pinot!”. Wrong there too … it’s actually “Pinol” … but you’re getting warmer. But hey, there’s no reason you can’t say this is a “Pinol from Spain” — and let the uninformed think it’s Pinot Noir.

Pinol is actually not a grape, but the name of a family owning a winery (Vinos Pinol) in a little town in Spain called Batea, within the region of Terra Alta. This is a significant fact of geography, because Batea is in what is called “Zone 5”, and just a hop, skip, and jump away from Priorat, which is a Spanish wine region that produces world-class wines that no one with a nose in Napa Cab has ever heard of. Which is just as well — allow geeks of Spanish wine to continue getting great deals.

Back to Ludovicus ï¿½

The palate has similar characteristics: wide open, forward, upfront ripe black berry fruit is immediate on the palate, and is followed by spicy vanilla notes before finishing with a mixture of fruit, earth, black pepper, and tobacco. Everything is held together with ripe, mild to medium tannins and mild to medium acidity. By itself, it is interesting and borderline contemplative. With food, its upfront ripe fruit and structure has enough to match with burgers, mac and cheese, leaner meats, such as roast turkey and chicken, turkey or tofu burgers, gamey fish, and grilled vegetables. This might be a bargain bottle for Thanksgiving dinner, and at around $9 qualifies in my book as an Everyday Wine and Great Value.

By the way, thanks to David Ogilvie of Purple Lips Wine Log for the bottle photo of Vinos Pinol Ludovicus you see here. He also reviewed this wine, if you’d like to get another person’s opinion.

Find this wine from a retailer through WineZap or Wine-Searcher
Vinos Pinol Ludovicus 2005 from Wine.com