You are here: Home / Archives for Wine Reviews / Great Values 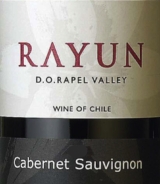 In these difficult economic times, we wine geeks with short pockets must do a better job of hunting down the great values. Traditionally, I have looked to South America for dirt cheap deals on deliciously drinkable wines.

At one time, Chile was a great place to find fantastic values. Then the secret got out, and Chilean bottles went up in cost — allowing Argentina to arrive as an affordable area for the adventurous. But of course, eventually enough people discovered Argentina, driving the prices up. While the see-saw continues today, I’m happy to report that nicely priced daily drinkers are still available from both countries — but they take a little more time and effort to unearth.

In this case, you need to look away from the better-known producers and toward the Rapel Valley, an area which has a history of producing fine red wines based on the Carmenere and Cabernet Sauvignon grapes. The winery is “Rayun” and it’s not always found on the eye-level shelves of the wine shop — so stoop down and check the lower levels and the bargain bins (use your knees, so you don’t hurt your back!). At around seven or eight bucks, it’s a good value.

Open nose of dirty earth, tobacco, green bell pepper, some black fruit (cassis, blackberry). Smooth texture, almost creamy mouthfeel. Good ripe black fruit flavor — blackberry, cassis, black raspberry — with a hint of spice and mild earth. Acidity and tannins are about equal, both mild to medium and in fair balance to the fruit level. A nice, soft, red wine that is a decent choice as an everyday drinker. About what you would expect from an under-$10 Chilean Cab — tastes more like a Merlot. Enjoy it alone or with mild cheeses, pasta in marinara, turkey burgers, simple “bistro” fare.

Find this wine at a retailer near you through Wine-Searcher, Vinquire, or WineZap

Autumn is almost upon us in the US, but it’s still warm enough to enjoy pink wines. This one comes from the Cotes-du-Rhone in France, an area that’s better known for red wines that some describe as “bistro wines” for their ability to match with a variety of dishes found on traditional bistro menus.

Similarly, this rose is made from the same grapes as its red wine cousin — Grenache, Syrah, and Cinsault — and shares its versatility.

Nose is mildly aromatic, expressing citrus, strawberry, and a hint of cherry. Very clean on the palate, with mild strawberry and citrus flavors. Acidity is somewhere between mild and medium. The finish is pleasant and balanced. This is an enjoyable, refreshing wine on its own, with enough structure to match with food. I matched it successfully with spicy turkey sausage with sauteed peppers and onions; it should be equally good with other lean and spicy dishes, as well as chicken and pork, and vegetarian cuisine. At about ten bucks (under ten in some places), this is a great value.

Ever since “Sideways” came out, everyone and their brother became a Pinot Noir snob, and the wine suppliers reacted by flooding the market with all kinds of swill labeled with that classic French varietal. Four years after the movie, wine shops can’t keep enough Pinot Noir stocked on the shelves — from all areas of the world and at all price points. Some of it is good, much of it mediocre, and too many are awful. The problem is that you can’t force production of the wine anywhere you want, anytime you want — Pinot Noir is a fragile grape, easily affected by temperature changes and representative of the quality of its soil. The reason it wasn’t a big deal in the mass market before is because of its fragility — it’s difficult to make good-quality Pinot Noir, period, never mind trying it year in and year out.

If you’ve ever had REAL Pinot Noir — the stuff that costs a minimum of $40 per bottle and has all kinds of French words that 95% of the population can’t comprehend — then you know that most of the affordable wines labeled “Pinot Noir” from outside Burgundy are, well, pretenders. But that’s not to say you can’t find a decent drinker.

For a while, I turned my nose up at these pretenders, then realized how dumb it was of me to do so. It was a matter of managing expectations; previously, when the label said “Pinot Noir”, I was expecting sheer bliss in a bottle. Now, I look at the price tag — if it’s under 25 bucks, I’m just hoping the wine is drinkable, and judge it as a “red wine”, rather than against the glories of Burgundy.

As it turns out, there are valid quaffers and good table wines labeled as Pinot Noir in my cheapskate price range, and I’m constantly on the lookout for well-made bargains. I found one recently from the Fleur winery in Carneros, California — for about $13.

Bright, open nose of fresh sweet strawberry, red cherry, maraschino, red raspberry and a distinct floral character â€“ hence the name “Fleur”. In the mouth you get upfront, forward fruit: ripe strawberry, red cherries, red raspberry, and cranberry. Acidity is mild to medium, tannins are mild. This wine drinks similarly to a soft Beaujolais Cru (Fleurie?), and is enjoyable on its own though better with food. Have it with roast chicken, pork chops, turkey, vegetarian cuisine. A good value.

Find this wine at a retailer near you through Wine-Searcher, WineZap, or Vinquire

Ever since reading the novel Sideways

(and watching the movie

), I’ve been obsessed with finding quality Merlot wines — so forgive me if I post too many reviews on them.

This one comes from France, from the southwestern part of the country (officially, “South West”) — a region that is often overlooked by the wine snobs because of its history as an area of high-volume production. However, there are many, many, tiny producers strewn throughout the South West, from places such as Languedoc-Roussillon, Costieres de Nimes, and Provence — which is where Domaine de Gournier is situated.

Luckily, there is an American importer by the name of Bobby Kacher who knows this area pretty well, and brings in some high quality bottles at more than fair prices. This Merlot is no exception.

A bright, ripe, open red wine. On the nose is black fruit, tar, tobacco, earth, and black pepper. . Luscious and jammy upfront, spilling over with black and red raspberries. Smooth as glass texture, almost creamy, carrying the ripe fruit into a well balanced finish of mild acidity, medium tannins, and plenty of berries and spice. Match it with burgers, chili, sloppy joes, tacos, and cheesy dishes. A full, fruit-forward, classy wine that over-delivers on its price. At about nine bucks or less, it is a great value.

Find this wine at a local retailer through WineZap, Wine-Searcher, or Vinquire

Grenache of fire! I guess that means it’s pretty darn hot in Catalayud, Spain, where the vines of this grape grow. Garnacha / Grenache is a hot weather whore of a grape, much like Syrah and Zinfandel.

Luckily, this wine outperforms the old Renault Fuego (with or without the biturbo, it makes no difference).

For the uninitiated, Garnacha is the same grape known as Grenache in France, California, and many other areas of the world. In fact, Grenache / Garnacha is one of the most widely planted grapes in the world, though it’s most commonly associated with the hot, arid regions in the south of France, the southern Rhone Valley and throughout Spain. If you’re unfamiliar with the Garnacha of Spain, it may be helpful to know that Grenache is usually one of the base grapes of Cotes-du-Rhone and Chateauneuf-du-Pape (often, these wines also have Syrah, Cinsault, Mourvedre, and other grapes blended in as well).

But enough of the French version; this wine es de Espana, and does a fair job of representing the Catalayud region. Though “DO Catalayud” (“DO” is pronounced “dee – oh” and is short for Denomination of Origin) is fairly new to US consumers, in fact they’ve been making wine there for oh, about 2000 years. The region sits in the province of Zaragoza, toward the western boundary of Spain and sort of in the middle (between north and south). It should not be confused with Cataluna, which is another DO entirely and is covers several provinces. OK, enough with the boring details, let’s taste the wine …

On the nose, this wine shows ripe black fruits: black raspberry and prune, with a touch of eucalyptus, pepper, and a smidgeon of earth. The palate offers a silky smooth texture, warm black raspberry, black cherry, and plum, with a touch of spice â€“ maybe vanilla? Acidity and tannins are medium, appropriate for food but not so high that theyâ€™re overbearing when this wine is drunk by itself. Drink it with burgers, skirt steaks, cheese, tacos. At around eight bucks or less, this is a very good value. Yet another winner from perhaps the best importer without a decent website, Jorge Ordonez.

Find this wine at a local retailer using Wine-Searcher, Vinquire, or WineZap.