You are here: Home / Archives for Joe Janish

Buying a bottle of Malbec can be a somewhat mysterious experience, as the grape — much like Chardonnay — can be so many different things. Think of Malbec as the Peter Sellers of grapes: so many disguises and personalities, and you’re never quite sure which one you will get.

Of one thing there is little doubt: Malbec from Argentina is nearly always a good value. (Though we’ll see how long that lasts, as more and more people are discovering the grape, and demand is increasing.) However, it can be soft and easy, lively and vivacious, or bold and dominating. There are simple Malbecs that you may chill for a while and enjoy with chicken salad, and there are complex, full-flavored, tannic Malbecs that you store in the cellar for 10 years or more.

Never having the Gascon Malbec before, I had no idea what to expect. Since it cost only about nine bucks, I figured there was a good chance it would be on the fun and fruity side, soft, and easy drinking. Boy was I wrong, and knew it the minute I stuck my nose in the glass. Green, herbal, earthy aromas dominate the nose, saddled by black fruits, black pepper, and a touch of tar. On the palate, it’s all black, ripe fruit, with black pepper, tar, and hints of tobacco, wrapped with ripe tannins and a good level of acidity. The finish is mostly tar, tobacco, and black pepper, and is longer than expected, carried by the medium-high level of tannins and acidity. Final verdict? This is an excellent value, a bold red wine begging for steak, chops, or cheese. And if you like a wine in this style, it is fairly enjoyable all by itself.

Note: I recorked the half-full bottle and stuck it in the fridge, and two days later it was nearly as enjoyable as when it was freshly opened. To me that makes it all the more valuable.

Find Gascon Malbec at a retailer through WineZap

Viognier (vee-ohn-YAY) has historically been a fairly rare grape, grown primarily in the Rhone Valley region of France and most famous for a wine called Condrieu (kohn-dree-yuh ). Even as recently as 20 years ago, no more than 100 acres of Viognier vineyards were planted worldwide — the bulk of it still in the Rhone with some coming out of the Languedoc-Roussillon region (also in France) — mostly due to its tiny yields, inconsistent ripening, and small demand.

However, in the early 1990s, Joseph Phelps began growing Viognier, Syrah, and other Rhone varietals in his California vineyards, sparking a movement dubbed the “Rhone Rangers“, where several other winegrowers followed in the experiment of planting known-as-Rhone vines in left coast soil. The results have been mixed, though it’s still quite early to be critical — considering that the Rhone Valley has had a few hundred years’ head start. Every once in a while an outstanding example comes out this laboratory, such as this Viognier from Francis Ford Coppola.

The nose exudes a perfumey, ripe, spicy fruit aroma that immediately screams Viognier.
True Viogner from the Rhone has a very distinct aroma and flavor that many either love or hate — and this bottle from the Russian River Valley of California captures that distinctiveness, resembling some of the best examples from the Rhone.

The Coppola winemaker allowed the Viognier to express itself in all its uniqueness, fermenting it in neutral stainless steel. The result is a very clean, pure expression of the varietal, sans the oily texture that sometimes carries the wine. Rather, the texture is smooth, closer to creamy.

In the mouth, this wine shows typical Viognier character: spicy green melon, Anjou pear, a spicy element that might be described as ginger snap (remember those ginger snap, windmill-shaped cookies your grandma fed you?) or cardamom, with hints of peach, lime and allspice. The acidity is remarkably high for a Viognier, which places it at medium to medium-high on the scale (Viognier often tends to be fatter) and thus positions it to be an excellent match for food. The finish is also remarkable for its length and fulfilling fruit. This is a very classy, polished wine that captures true, distinct Viognier character and then some, offering ripe, rich fruit complexity while also offering mouthwatering acidity and remaining low in alcohol (another Viognier tendency; most Viogner, especially from the Rhone, can be a little on the hot side).

Match it with roast chicken, roast ham (pink or fresh), pork chops, Thai food (lemongrass!), mild vegetarian hors d’oeuvres, and Indian vegetarian dishes. It’s also enjoyable on its own. However you drink it, just be sure you DO NOT OVERCHILL it. This wine really shows its complexity and best flavors at a few degrees warmer than other white wines; if it’s only a few degrees to cold, you might miss out on many of the details and nuances that make this wine so special.

By the way, don’t look for this bottle in your local wine shop — it’s probably not there. This wine is most easily found online — through the Coppola website — or from the winery in Sonoma (if you happen to live or travel nearby). However, it is worth the effort. 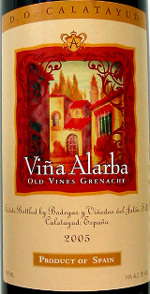 While it’s obvious that most wines are made from grapes, it’s uncommon for a pontificator such as myself to describe one as “grapey” … we wine snobs and scribes are more apt to attach descriptors such as “forest-floor earthiness”, “musky feral aromas”, “baritone richness”, and my recent favorite, “umami character” (you can’t make this stuff up!).

However, I’m going to go against the grain and say that Vina Alarba Grenache is simply, “grapey”. It smells grapey and tastes grapey — as in grape juice or grape jelly.

It’s more than that actually … the grapey-ness (is that a word?) is part of the open, ripe fruit aroma that also has a hint of red licorice. In the mouth you get the same grape jelly character along with red licorice and similar candylike flavors upfront, held together by mild to medium acidity and mild tannins that give enough structure to match with a wide variety of foods. Despite the perceived sweetness — which by the way makes in an excellent match for roast duck with plum sauce, and meats doused in BBQ sauce — the wine finishes dry, with a balanced aftertaste.

In some ways it reminds me of Beaujolais Nouveau … only, a Nouveau with more structure, seriousness, and length. Though a wine connoisseur with a cellar full of Bordeaux would likely scoff at this wine, it has its place with those of us who have an appreciation for solid wines under seven dollars. Match it with the suggestions above, Mexican fare, and non-snobbish appetizers (i.e., pigs in blankets, “port wine” cheese, hot poppers). This wine also qualifies as an excellent introduction to the “white wine only” crowd. 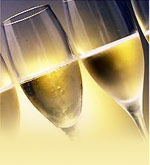 Folks in the NYC area may want to attend this Champagne tasting to benefit the Living Beyond Breast Cancer organization. The event — sponsored by Riedel Crystal — takes place on September 27th (next week!) from 5pm to 8pm at New York’s hottest Greek restaurant, Parea, on 36 East 20th St.

Besides benefitting a great cause, you will have the chance to taste top Champagnes from major houses such as Moet & Chandon, Gosset, Mumm, Perrier-Jouet, and Pommery — to name a few.

In addition, Maximilian Riedel of Riedel Crystal America will be at the event to premiere Riedel’s new, Pink, “O” Champagne glass — the sales of which will benefit charity. If you’ve seen / used the new “O” series, you know they’re pretty cool; they have no stems (which is a problem for people who want to look good sticking their pinky out when holding their glass).

All guests will receive a free “O” glass to taste the Champagnes, and you’ll get to sample Parea’s great hors d’oeuvres.

If you can get to this event, do it … it’s not often you get a chance to taste so many awesome Champagnes at one time. It will be a great chance to do real comparison tasting between bubbles … and you’ll be helping the Living Beyond Breast Cancer as well (see their website at www.lbbc.org). Who knows, you might even bump into Vino Joe at the event!

Contact the LBBC at 610-645-4567 or email Marcia@lbbc.org for tickets. Get the tickets in advance and they’re only $150; otherwise you’ll pay $175 at the door. Considering that it would cost a heckuva lot more for you to buy and uncork all of the Champagnes you’ll have the opportunity to taste (not to mention the high-class eats), this is a bargain. 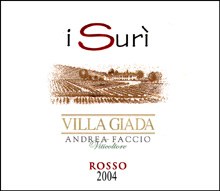 One of my favorite varietals in the world is Barbera, particularly from the Piedmont region of Italy, and specifically from the areas of Asti, Alba, and Monferrato. The nice thing about Barbera imported from Italy is that, generally speaking, you get what you pay for, and there are excellent bottles starting around 12 bucks all the way through around forty, With my meager salary, I tend to stay in the under-$20 range, and there are plenty of good values to choose from. At the same time, I’m always on the lookout for an Italian Barbera at ten bucks or less. They’re hard to find, but usually worth my hard-earned dollars.

So when I saw this bottle from Suri for $9.99, I pounced on it. It’s made by a winery called Villa Giada, which is located in the middle of Piedmont, somewhere between Alba and Asti (technically, this wine is a Barbera d’Asti). Winemaker Andrea Faccio ferments the juice in stainless steel and allows it to go through a full malolactic (this is geek talk for a second fermentation, whereby malic acid is converted to lactic acid, and the result is a smoother, rounder, mouthfeel). Though not the best Barbera I’ve ever tasted, it did not disappoint. The nose is slightly subdued, and not a good hint at what the palate offers. I got some earthy, herbal aromas, with hints of black cherry layered below. In the mouth, however, I was welcomed by bright, fresh flavors of black cherry and black raspberry. This wine is ripe and full, balanced by mild acidity and mild, ripe tannins. It finishes with harmony, no one element overpowering the other. I enjoyed it on its own, and as a match for Manwich-brand sloppy joes. It will go just as well with pasta in meat sauce or marinara, burgers, tacos, mac and cheese, pizza, and any dish that includes a tomato-based sauce.