You are here: Home / Archives for Wine Basics / Wine Grapes

END_OF_DOCUMENT_TOKEN_TO_BE_REPLACED 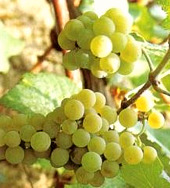 If you ever venture into the South American aisle of a decent wine shop (and having a “South American” aisle is a sign that it IS a decent wine shop), no doubt you’ve noticed a bunch of bottles from Argentina with “Malbec” on the label. In fact, you probably have tried at least one or two Malbecs, as it has become more prevalent and popular in the USA over the last few years. Would you like to know more about this mysterious wine?

To start, Malbec is a grape, and indigenous to France — which may seem strange since all the Malbec you see seems to be from Argentina. Fact is, in France Malbec is known mostly as a mere blending grape, used in faint quantities to soften the strength of Merlot and/or Cabernet Sauvignon in Bordeaux wines. Well, that’s not entirely true … the grape is also known as “Cot” in areas outside of Bordeaux — for example it is the main grape for the “black wines” of Cahors (they’re not really black, but they’re a really dark shade of red, and leave your tongue looking like a Chow Chow’s).

Somehow, some way, Malbec found its way to Argentina, where it flourishes. The high altitudes, long, warm sun-filled days, cool nights, extra-dry climate, and sandy, alluvial, porous soils are ideal for the grape. Good thing, because Argentineans eat a lot of beef, and drink a lot of red wine — and for the better part of the 20th century, much of that wine was Malbec. Malbec vines are everywhere in the South American country, producing enormous volumes of red wine for its citizens — who used to be among the highest per-capita wine consumers in the world (80 liters of wine per person per year back in the 1960s — wow!).

However, in the 1980s, someone had the bright idea to pull all the Malbec vines and replace them with more marketable (and exportable) grapes such as Chardonnay, Merlot, and Cabernet Sauvignon. By the end of the decade, only 10,000 acres of Malbec were left — at which point more intelligent winemakers came in and said, “hey, there’s nothing special about Cabernet and Chardonnay from Argentina … but that Malbec — wow!”. As you might guess, the Malbec vines went back in the ground. At least the Argentineans became skilled at vine-pulling.

In the 1990s, with Argentina’s return to democracy and a hyperinflated economy, winemakers from around the world descended on and purchased undervalued Argentine vineyards — and continued planting the country’s most special grape. The influx is starting to pay dividends now, as more and more high-quality, fairly priced Malbecs are entering the market every year.

OK, But What Is Malbec, Really?

So that’s the background of the grape. But how about what it means to you, poured out into a glass?

Hard to pinpoint, actually. On the one hand, Malbec can be an inky black, rich and deep wine with big tannins and 20-year longevity. Personally, I’ve tasted some $50-$60 Malbecs that rival “Super Tuscans” and Calfornia reds that cost twice the price. On the other hand, Malbec can also be fashioned into a ripe, approachable, soft, ten-buck wine that matches perfectly with pizza or pork.

Generally, though, most Malbec wines share these characteristics: ripe black fruits, such as plum and blackberry; peppery notes; earthy; firm tannins; ample acidity; conducive to oak aging. In other words, a flavor profile that may be somewhere between California Cabernet Sauvignon and California Merlot. The Malbec wines called “Cahors” (which may be found in the France aisle of a very good wine shop) tend to be more inky, more earthy, and a bit more tannic. The Argentine examples tend to be riper and more jammy (though there are some “old school” Argentine wineries that go more toward the rustic side).

If you haven’t yet tried a Malbec, and you enjoy red wines, then it’s a no-brainer — buy one and match it with a grilled skirt steak (or portobello if red meat makes you uncomfortable). As with most wines, you will get what you pay for, so don’t pull a bottle from the bargain bin and expect it to bowl you over. My advice is to get to that decent wine shop, find the South American aisle, and spend somewhere between $12-18. You won’t be disappointed.

Italy may be best known for Sangiovese, the base grape of some of the countryâ€™s greatest wines, such as Chianti and Brunello. Rivaling Sangiovese is Nebbiolo, the fruit producing Barolo and Barbaresco. A third, lesser-known (at least, outside of Italy) yet just as supreme grape is Aglianico (ahl-YAHN-eh-koe).

Grown primarily in the southern part of Italy, it does best in hot climates and volcanic soils. The grape ripens late in the harvest, and if done right will produce wines that are inky black, with firm-to-huge tannins, and a powerful structure that benefits from 5-10 years or more of cellaring. Common characteristics of Aglianico wine include a smooth, rich, texture and aromas and flavors of black fruit, dark chocolate, coffee, leather, smoke, and mineral. In other words, pretty complex. While traditional / old-school Aglianico wines tend to be too harsh and bold when young, many wineries are employing modern techniques to produce examples that are ready to drink upon release.

Aglianico is an important grape in the Campania region, where it is the main ingredient in Taurasi. You may have never heard of Taurasi, but it is well worth picking up if you come across it. Aglianico also grows in the south-adjoining region of Basilicata, producing world-class wines called Aglianico del Vulture (donâ€™t say it like the bird; itâ€™s properly pronounced as vull-TORE-ay).

Why go through all the bother of hunting down these hard-to-find, impossible-to-say, unusual wines? Three reasons: first, the quality is just as good as (maybe better than) Italyâ€™s best wines; second, many examples are enjoyable to drink right now (as opposed to sticking the wine in a cellar for 10 years); and third, you can find affordable bottles. Personally, I like the affordable part, especially when Iâ€™m staring at a shelf full of Barolos and Barbarescos that START at 80 bucks or more.

In fact, some outstanding Aglianicos can be had for about half that price. But before you plunk down a pair of twenties, you can taste an introductory example for less than 10 bucks: Ars Poetica “Vulcano” (review coming in a few days), which is ready to drink now with burgers and steaks. Other brands to look for include Tenuta le Querce, Sasso, Di Majo Norante, Terredora di Paolo, Cantina del Taburno, Feudi di San Gregorio, and Caputo.