You are here: Home / Archives for chardonnay

Every once in a while I get a hankering for big, buttery, Chardonnay — i.e., “New World” style, usually from a warm-to-hot wine region.

Although this wine comes from grapes picked both from Carneros and Napa Valley, to me, this wine speaks Napa. When I think of Napa Valley Chardonnay, I think of a rich golden color, toasty vanilla and super-ripe pear aromas, over-the-top sweet ripe fruit upfront, and a hefty, almost syrupy texture. Pine Ridge delivers on all these expectations.

To be clear, this is a style of wine that I want to have occasionally — not all the time. It’s huge in the mouth, with globs of sweet bright fruit that is almost cloying, but somewhat tempered with ample acidity. This wine definitely got a good dose of American barrels, because in addition to the vanilla punch it has more tannin than most rose wines and a few light reds. Though it finishes dry thanks to the acid and tannin, this has plenty of sweet flavor upfront and through the midpalate, which means I recommend you pair it with spicy foods. I matched it successfully with BonChon fried chicken. On its own, I’m sure there is a crowd that will love this as a “cocktail wine,” though its acid and tannin structure beg for food.

This wine has also been reviewed by Heidi of Brix Chicks, Bill’s Wine Wandering, and The Wine Spies. 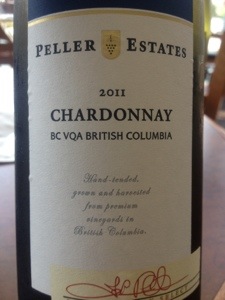 As a follow-up to the post on Inniskillin Pinot Grigio, my personal somm offered me two Chardonnays from Canada — one on the high end, one on the low end. This one was on the low end of the spectrum. But don’t take that the wrong way — this was no dog.

Peller Estates Chardonnay has an expressive nose of spicy vanilla oak, ripe pear, and honeysuckle. With that nose I was expecting an in-your-face, fat, sugary, over-oaked blast of tree bark on the palate, but that was not the case. Rather, there was plenty of bright acidity balancing ample ripe fruit, and the spice flavor was more toward something exotic like ginger or cardamom than the typical vanilla extract we’re used to tasting in cheap California Chardonnays. The finish was well-balanced and even had a hint of tannin. A nice solo drinker, and it would likely match with roasted or grilled pork.

Unfortunately, I think this wine will be difficult if not impossible to find in the USA, but if you live in Canada, you can find it at a retailer near you using Wine-Searcher

If you find yourself in the Niagara, Ontario area of Canada, check out the winery personally — for more info, visit the Peller Estates website.

By the way, yes I realize the winery is in Ontario and the wine is from British Columbia, which is a pretty far distance. If anyone has more information on how the wine is produced, please elaborate in the comments. Thank you.

We’ll soon review the Chardonnay that was on the higher end — stay tuned.

Who needs Beaujolais Nouveau when you can “get local” with a luscious white wine from Long Island?

The truth is, I enjoy the hoopla, celebration, and tradition around Beaujolais Nouveau. Not to mention, the grape-jelly-like wine pairs mighty well with nearly everything on the Thanksgiving table. Just make sure you drink it before Valentine’s Day, OK?

Now, what if you’re one of those people who is anti-French? Or a staunch locavore? Or what if you feel that the American tradition of Thanksgiving should be celebrated with an American wine? There’s more to America than Zinfandel, and though Chardonnay is technically a French varietal, Macari’s is 100% grown and bottled in ‘merica, the good ol’ U-S-of-A. Most importantly, Macari Early Wine Chardonnay is guaranteed to pair well with the traditional turkey as well as nearly every trimming on the table. And, if you’re one of those who does something other than turkey, this wine will also go very well with roast pork, spiral ham, duck, chicken, or game fowl.

The nose has an understated aroma of pear – like pear nectar that you might drink from a Goya bottle or can. In the mouth, though, it explodes with bright, juicy flavors that remind me of fruit salad: sweet pear, peach, pineapple, guava, green seedless grapes, and white cherry. It has mild acidity and canadian pharmacy and a healthy dose of residual sugar that pushes all the fruit forward and makes for a delectable foil to hot and spicy foods; think sausage stuffing. It finishes with a pleasant, clean taste of pure fresh apple juice. This is a truly enjoyable, lovely wine that will be hugely popular with people who normally don’t drink wine. The snobs will eschew it for its r.s. level but watch them as they take surreptitious sips in between their condescending comments.

If you can get a bottle for Thanksgiving, by all means do so. And if you can’t get it in time for Thursday’s feast, pick it up anyway and enjoy it later with Chinese take-out, spicy Thai, Indian cuisine, buffalo wings, or on its own as an aperitif.

Alternatively, purchase it directly from the winery by visiting the Macari website

This wine was also reviewed by New York Cork Report and The V.I.P. Table.

Forgive me if I sound like a shill for Wine.com this week, but it’s all in the name of helping you get good wine at good prices — and one-cent shipping

is nothing to sneeze at in the quest for great values.

That said, this is the last day of one-cent shipping from Wine.com. So I’ve done a quick review of the wines available from the site, which I think give good bang for the buck — some call it “QPR” or great quality:price ratio (I call them “no-brainers”).

Click on the wine names to order directly from Wine.com — do it before midnight on September 10th, and you’ll get a case delivered for one penny.

$19.99 sale price
Kanonkop is the king of Pinotage — the beginning, middle, and end of any and all conversations concerning the grape. The 2004 vintage was the first made without legendary winemaker Beyers Truter, but that shouldn’t preclude you from denying it. However, Pinotage is a wine with a distinct flavor profile, which includes an element some describe as “band aid”. It’s one of those wines that people either love or hate. If you love it, this wine at under twenty bucks is an incredible value.

$17.99
Year in and year out, Argiolas consistently delivers great wines from “unknown” varietals — i.e., grapes with which the casual wine consumer aren’t familiar (I’ve reviewed their “Perdera” and “Costamolino” in the past). This wine is what I like to refer to as a “Super Sardinian”, a fabulous red for stews and steaks made from 100% Cannonau (you may know the grape better as Grenache). A perfect choice for the autumn season.

$19.99
It’s wine “discoveries” like this that invigorate my passion for grape juice — the unknown jewels from regions and grapes that even geeks overlook. People generally know wines from the northern regions of Italy, and Sicily is gaining popularity, but Calabria? Gag-me-up-what? Truth is, Statti Gaglioppo is an open, ripe, distinctive red that would likely cost $35-40 if the label said “Tuscany” instead of “Calabria”. To me it’s something like a cross between a Chianti Classico Riserva and a Moulin-a-Vent. At under twenty bucks it’s a steal.

$18.49
OK, this one isn’t on sale, but it’s an incredible value nonetheless. Made by flying winemaker extraordinaire Michel Rolland, this Argentine blend drinks like a wine twice its price. Great with ribeyes and skirt steaks.

$17.49
The name of this wine reminds me of “Interplanet Janet“. Now that you have an idea of my age, I’ll tell you the taste of the wine reminds me more of a Riesling from Alsace than Australia — and that’s a good thing. It has that typical oily texture and flavors of fresh ripe apple, lemony citrus, and stony mineral that are common from Alsace, and also has the edge of tart acidity to hold everything together and make it a good food wine.

$19.99
I’m generally wary of California Chardonnays, as many tend to be overoaked and unnaturally sweet. La Crema, though, is one brand that has always delivered good balance and pure, ripe fruit. I reviewed the 2005 and jotted similar notes for the 2006. There’s every reason to believe the 2007 is similarly scrumptious.

In the past, when I was geekier, more condescending, and had free access to world-class (read: expensive) wines, I stayed away from the “mass produced” brands. But lately I have become more humble and open to wines from any and every producer. And there’s something to be said for a wine that provides consistency year in and year out.

So with my newly opened mind I uncorked this Chardonnay from Robert Mondavi. Called “Solaire”, it retails for between $12-15 and has a cousin named Cabernet Sauvignon using the same moniker. The Chardonnay delivers good bang for the buck and is easily found at wine shops across the United States.

Rich nose of ripe and overripe white fruit — pear, apple, peach, banana, along with honeysuckle and vanilla. In the mouth it has a weighty, slightly oily mouthfeel and a creamy texture that carries ripe pear and candied peach fruit flavors. Also some oaky vanilla and honey. Acidity is low to medium, so with the abundance of ripe fruit this wine has a slightly fat character to it. OK on its own, better with food. Match it with rich and buttery fish and chicken dishes, such as shrimp scampi, lobster, chicken francaise.

Or, find this wine at a retailer near you using Wine-Searcher, Vinquire, or WineZap