You are here: Home / Wine and Food Matching / Wine for Toning Down Spicy Food 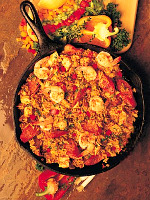 The other day I found myself dining at The Delta Grill in New York City, which you might guess by the name specializes in live blues and “down home Louisiana” cuisine such as Cajun and Creole. If you have ever been to ‘nawlins or watched an episode of Emeril Live then you know that the food tends toward the spicy side. Spicy as in hot, and depending on the dish, it can be “ouch!” hot on the palate.

Generally speaking, the best alcoholic beverage to wash down hot and spicy food is a beer, and The Delta Grill has plenty to choose from. But I’m a wine professional, and as such my first inclination in any restaurant is to find and scan the wine list.

But what wines could possibly work with the hot and spicy tones of cajun cuisine? The higher alcohol content of wine only intensifies the heat — pouring gas on the fire, so to speak. How is that good?

Certainly, that argument has merit. Generally speaking, most wines will indeed heighten the heat. But if you are like me, and hell bent on finding wines that work with spicy foods, it is an absolute possibility.

In this case, I perused the wine list at Delta, and found — much to my delight — KWV Steen. Delight not only because the perceived sweetness of Chenin Blanc is a perfect foil to fiery food, but also because it just happens to be a wine imported by Opici. I swear on my grandparents’ grave that I had no idea we had an item on the list — it was completely random (and strangely random at that; most of the list is comprised of mass-market, well-known brands) to find it there, and completely random that my wife and I stopped in for a meal (our dog was being treated at an emergency vet hospital a few blocks away). Had the KWV Steen not been there, I likely would have gone for a preferably low-alcohol, similarly fruity wine such as Riesling, Gewurztraminer, Vouvray, or Pinot Gris. In most cases a rose would work just as well, as might a light-bodied red such as a Beaujolais Villages. In fact, I might even go so far as to drink a (gasp!) White Zinfandel; the sweetness will extinguish the fire on the palate.

OK, that might be a stretch. If White Zin was the closest thing to an appropriate wine match, I’d most likely turn the page to the beer list — and there’s no shame in that.