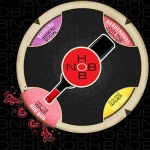 Instead of spending much more time letting the HobNob website make me feel old and un-hip, I moved on to the actual wines. I tried very hard to like them — I really did — but they just weren’t my style.

That doesn’t mean you won’t like them, of course, because wine is subjective and everyone has different tastes. And thank goodness for that, or we’d all be fighting over the same bottles of wine.

There was a distinct theme running across all four red wines: chocolatey, vanilla oak. Everyone likes chocolate and vanilla, so I understand why HobNob found a way to get that flavor profile into their wines. But for me it was a little too much, robbing the varietal character of the wines. In other words, if the wines were given to me “blind”, I probably would not have guessed which was Pinot, which was Cab, etc. — they all tasted more or less the same. There was a strong oaky vanilla and chocolate flavor in all of them, with the bare hint of the varietal somewhere in the background. Additionally, the structure was out of balance — the wines were on the fat side (meaning, they lacked acidity) and had soft tannins. These attributes are fine for a “cocktail wine” — i.e., a wine to drink during cocktail hour at a bar or party, and without food. And for that purpose, these wines are perfectly suitable, particularly for people who are newbies and moving their palates from thick microbrews to the wine scene. But once food is introduced … well, I’d have to switch to something else.

That’s not to say that Hob Nob wines should be avoided. There is no doubt in my mind that there is a significant portion of the population that will appreciate these wines. The price is right (under ten bucks). And again, I think they are a great bridge from the chocolate stouts and mocha porters. Wines like this are excellent introductions for people who think wine is “sour”, “bitter”, or “sharp”.

Does that make me a snob?

Let me know in the comments … and also, please share your opinion of Hob Nob wines.

Oh and by the way, these wines are from France — Languedoc, specifically. I never would have guessed that based on the packaging and marketing. They seem to be trying very hard to be un-French.

Use the links below to find Hob Nob wines at a retailer near you: